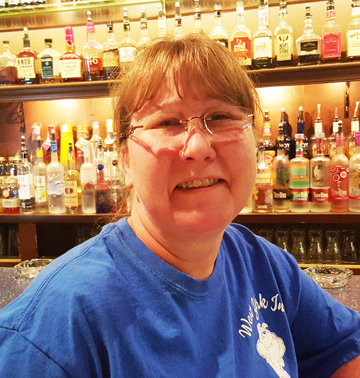 October 1, 2015 By mavericks in Latest News Comments Off on Member of the Month: October 2015

Business History
Matti Berkheimer spent most of her adult life raising her children and running her own interior plant maintenance business. It wasn’t until she was looking for a part-time job in 2006 that she inquired at her favorite bar, the West York Inn. Luckily, owner Tom Garretty decided to give her a chance tending the bar. By 2011 Matti worked full time as a manager, helping Tom run the front and back of the house. When Tom passed away a few years later, Matti took over ownership and operations at the West York Inn.

About the Business
In recent years, Tom had updated the poolroom and installed a new liquor system that tracks costs and insures that every drink is served correctly. And after taking over, Matti continued to do a number of things that have helped to grow the business at the Inn. In addition to installing a new bar top and outside lighting, as well as fixing the ramp entrance, she also took more notice of the kitchen which will soon be serving a new, more concise menu reflecting the tastes of the customers. West York Inn features wings every Tuesday night and clams on Thursdays. They also allow customers to run the Jukebox every Friday and Saturday nights after 10 PM.