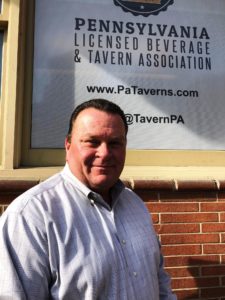 At its quarterly board meeting on November 6, members of the board of directors at the Pennsylvania Licensed Beverage and Tavern Association elected new board officers. All positions are effective immediately.

Tom Tyler, owner of McStew’s Irish Sports Pub in Levittown, was selected to become president. Mr. Tyler has been a member of the association more than a decade. He will serve a two-year term.

Jim DeLisio, owner of the Race Horse Tavern in Thomasville, won a two-year term to serve as the association’s vice president. Mr. DeLisio is a 19-year member of the PLBTA. In addition, he is the president of the York County Tavern Association.

Michelle Ritter, owner of the Willow Street Pub in Coplay, will serve a one-year term as secretary. Ms. Ritter has been a 19-year member of the association.