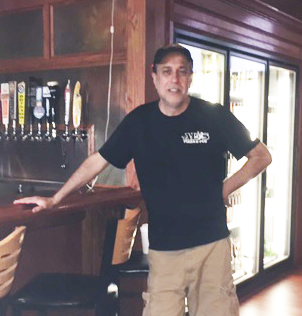 August 4, 2015 By mavericks in Latest News Comments Off on Member of the Month: August 2015

August 2015: Al Haulman
Al’s: Serving the Community for over 30 Years!

Business History
Al Haulman first got his start in the food industry when he was 15 years old, working at JoJo’s Pizza & Pasta shop in Mechanicsburg, Pennsylvania. From early on, he knew he wanted to be his own boss so at the young ago of 19, Al opened Al’s Pizza on June 1st, 1985. Al’s soon became a neighborhood favorite, as it was one of the first places in area to offer pizza specials. Not only that, but in an area where most restaurants closed at 9 or 10 PM, Al’s stayed open and made deliveries until midnight and 1 AM.

About the Business
Throughout the years, with additional locations in Dillsburg, Mechanicsburg, and Carlisle, Al’s had continued to grow. In 2011, Al bought a liquor license and converted the available space next to his original shop into a full service bar and restaurant. He also took advantage of the extra space by installing a number of large beer coolers for to-go and in-house consumption.  Most recently, it the spring of 2015 Al applied and received the Hire for Transport Permit and has been delivering the specified amount of beer to customers along with their pizzas and subs.

Giving Back
Al’s Pizza and Pub has always been willing to give back to community that has embraced them for all these years. The business is very much involved with the East Pennsboro School district, donating funds to support the High School football, baseball, and wrestling departments. They also participate by hosting fundraising events for the East Pennsboro Township Police Department, Ambulance Service, Enola Fire Company, West Fairview Fire Company, and other organizations in the area. Al’s Pizza and Pub recently celebrated their 30th anniversary by hosting an outside party where customers enjoyed craft brews, food, and local bands. For more information on Al’s Pizza and Pub, please visit www.alspizzaenola.com.