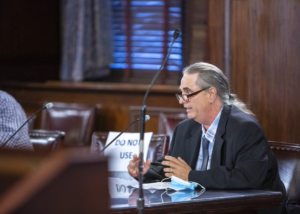 The following is testimony provided by Jim DeLisio, Board Member of the Pennsylvania Licensed Beverage and Tavern Association, on October 6, 2020, in front of the Pennsylvania Senate Community, Economic, and Recreational Development Committee. The topic was VGTs and skill games. Mr. DeLisio is also owner of the Racehorse Tavern in Thomasville as well as the president of the York County Tavern Association.

Chairman Killion, Chairman Williams, members of the Committee, good morning. I’m Jim DeLisio, owner of the Racehorse Tavern in Thomasville. I’m also a Board Member of the Pennsylvania Licensed Beverage and Tavern Association as well as President of the York County Tavern Association.

With me is Chuck Moran, executive director of the Pennsylvania Licensed Beverage and Tavern Association. Chuck will be available to help answer questions afterwards.

Let me begin by thanking you for inviting the Pennsylvania Licensed Beverage and Tavern Association to testify today about gaming in taverns.

The Tavern Association represents more than 425 small business taverns, pubs, and licensed restaurants across the state. Most of our Members own “R” and “H” licenses while some may have an “E” or even a club license. For the most part, we are your local bars, taverns, pubs, and licensed restaurants. We do not actively recruit large chains, grocery stores, or convenience stores which have an R license.

In terms of business, our average Member makes a living primarily from alcohol sales. In fact, based on our Membership studies, about 63 percent of their business is alcohol sales and 37% of sales are from food. For what it’s worth, the most popular beer served would be Bud, while the most popular mixed drink would be Jack and Coke.

Based upon Membership studies, our average member employs about 16 individuals including the owner and family members. They serve less than 4,000 customers every month. If you count the chairs and barstools, throughout my Member establishments, you’ll find less than 100 per establishment.

Simply put, my Members are your locally-owned, family-owned, mom-and-pop businesses. But they still represent an industry that employs about 140,000 Pennsylvanians.

As you know, my segment of the industry has been hit particularly hard as a result of this year’s COVID crisis. Many jobs have been lost. In fact, an August study of our Membership indicates an average of 13 employees were laid off or furloughed per establishment. That’s more than 80% of those in the business.

Furthermore, many businesses have been closed either temporary or permanently as a result of the pandemic. Those that are open have seen their business operations limited. Our Members have told us that without any change in the state’s COVID-19 order, 70 percent of small business licensed restaurants are either closed or facing closing in the upcoming year. More than one in eight has never been able to reopen since March. In the next month, another five percent say they will close. Another 29 percent say they will likely close by the end of the year, while 23 percent say they will likely close in 2021. That’s 70 percent of the state’s bar and tavern businesses.

Financially, for both employees and employers there is a high degree of uncertainty moving forward.

The COVID financial crisis comes only a few years after legislation was signed into law in which my Members lost the exclusive right to sell six packs. That was a significant financial setback for many of my Members, who have a profit margin of well under 5 percent.

And when our members suffer financially, like the clubs, families and communities lose. We have less to donate to local churches, nonprofit organizations, and youth organizations, which are a big part of what we are at heart.

Needless to say, we believe it is very important for these small businesses to find opportunities for additional revenue streams to replace what has been lost in recent years.

And, that’s where gaming can play a role. If it’s set up correctly, it will help these small businesses, local organizations, the local economy AND the state budget.

The PLBTA has a general position on gaming. We believe our Members should be allowed to offer legal forms of gaming in their establishments to entertain their patrons. That extends from small games of chance to any other legal forms of gambling, including skill/video games.

Expansion of gaming through taverns can provide that extra revenue stream that these businesses need. Expansion would help create and maintain jobs.

And, of course, there’s an opportunity to help Pennsylvania’s budget with a new source of revenue.

We do, however, need to remember lessons from the past. If the state chooses to expand gaming into taverns, it must not be set up like the past small games of chance or tavern games legislation.

The end result of that legislation was not positive for the state. Very few licensed establishments chose to offer small games – less than 75 at the moment. Why? There’s little profit after taxes and payment of supplies.

With everything that has happened to the industry in the last six months in combination with significant loss of six-pack sales as a result of Act 39, for gaming expansion in taverns to work, it would have to be attractive to the tavern owner.

As legislation is debated, taverns would seek a fair share of the revenue that would make it worth their time. Taverns would also seek assistance with any type of requirements that would require additional expenses for buildouts to place machines in their establishments. As these issues are considered, we would ask that our needs be considered and that we remain stakeholders in the process, to ensure such expansion will be financially attractive to our member bars, taverns and restaurants.

Again, I thank you for the opportunity to represent small business taverns and licensed restaurants today. Chuck and I will be happy to answer any questions you may have at this time and in the future.